When all else fails... Matlab

For the ME4444 Senior Design project, a mathematical model was needed to understand the lamina flow engine. Because the heat input is continuous and a function of the pressure and temperature of the hot chamber, a numerically iterative model was developed. The program functions by calculating the change in entropy, enthalpy, temperature, pressure, and energy as the stroke moves a few degrees. The following are data outputs. 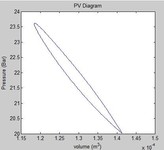 For ME4720 Thermal Design, a problem was given to optimize a heat exchanger to condense steam. Given the tube geometry, the number of rows and columns, as well as length of the tube, were to be optimized against cost. Additionally, pressure drop and mass flow rate were calculated for selection of a fan and to consider its operational cost. The following shows six different configurations as an example of how the program was able to output data with a given geometrical configuration.

For an elective course on robotics, the challenge was to model a robot using the Denavit-Hartenberg parameter approach. The following is a RRRRRR (6-axis) robot based on the TX90 Stäubli﻿ robot. The individual links were imported into Matlab as a *.stl file. Matlab was able to mesh the cordinates and shade them. The robot was fully capable of forward kinematics and was partially capable of inverse kinematics.